Since I did the work on this, let's make it available for those who'd like to know!

Here is a SUPER DETAILED look at what happens when werewolves procreate in my Trials of the Blood series . . . .

For the purposes of this explanation, please understand a couple of base facts:

Simply put, the heritability of werewolves is rooted in science, but has some points where it goes ever-so-slightly off the rails because of the supernatural/divine influence.

With me so far? Cool!

Let’s dive into this.

The ability to transform from wolf and back to human is a polygenic trait, which means that two genes must work together to create the outcome (which could be werewolf or human, depending on the genotype).

Gene 1 is marked T to indicate the ability to transform, and Gene 2 is marked H for humanity.

If there is a capital T in Gene 1, then it "overrules" Gene 2 and expresses as werewolf (at least, in the case of werewolves).

(In my initial work to figure this out, Gene 1 was marked W for wolf, but that did not speak accurately to the capability of the gene as future books in the universe depict other possible shifts, including bear and leopard.)

From here on, it is simplest to assume that any dominance in Gene 1 simply translates to a werewolf. (Though, if you're keeping up so far, it’s clear that in future books, dominance in Gene 1 could lead to something other than wolf, depending on how these creatures first came into being.)

Also to note, apparently our bodies basically check on things during the early weeks of pregnancy. At this time, if the chromosomal data doesn't match an expected outcome (or is otherwise coded improperly), then the body will abort the fetus and a miscarriage will happen.

Given this knowledge, we have nine different genotypes possible:

Okay, but so far, we've only been discussing born werewolves and humans.

What happens when a human is attacked and BECOMES a werewolf?

Well, let me start by telling you how that would even work.

First, you can’t just get bitten by a werewolf, that werewolf has to almost kill you. It isn’t until you’re about to take your final breath that the werewolf healing would take over and save you. At that point, the werewolf cells basically change your genetic make-up and “teach” your cells how to heal at a supernaturally rapid pace (among the other benefits of becoming a werewolf – but that is irrelevant to our discussion of heritability).

Simply put, the attack basically “switches on” Gene 1, granting it dominance over Gene 2:

BUT WAIT, isn’t TtHH one of those unviable genotypes?!

Yes, it is! But remember that we’re not talking about fetuses anymore, these are PEOPLE.

This is where we usually get crazed werewolves who cannot make peace between their wolf and human side. If you’re following so far, then it should be clear why: both the human and the wolf side of them are vying for dominance and neither will back down. Crazed wolves become hyper-violent and highly unpredictable. Nearly all of them are killed before they can procreate, though they often will attack other humans (thus creating more werewolves, which is actually the PRIMARY way the world gets more werewolves).

Werewolves that are made (through being attacked) have a harder time producing offspring. When their body does the check in the early stages of pregnancy, it also aborts homozygous dominance on Gene 1 because the resulting fetus is – for simplicity’s sake – too much werewolf.

So made werewolves have two additional unviable genotypes during procreation:

AND they have one more genotype that could attempt to procreate:

The problem here is that because it is a MADE werewolf, they are infertile. Remember, this is a genotype that normally would have resulted in an unviable fetus – this is on top of the fact that the creature is likely a crazed werewolf that normally would not procreate at all. But since not ALL werewolves with this genotype go crazy AND some could feasibly attempt procreation, it is included in my calculations.

That was a lot to handle....  ARE YOU STILL WITH ME? AWESOME!

Now’s where we get to the REALLY fun part for me!

I then took all of these viable genotypes and crossed each with each other to see which crosses yield which results. I then calculated the average percentages of offspring from each cross based on the phenotypes (because people don’t actually know offhand whether their genes are homozygous or heterozygous).

To be sure you’re reading this chart properly, here’s an example:

I have ONE MORE NOTE about these averages!

Why wouldn’t werewolves outnumber humans in the world?

There are a number of reasons for this, actually:

NOW – for those of you looking to really dig in to the science behind all of this – the averages in the above chart were calculated from the results of the following 28 Punnett Squares (with the offspring results to accompany each): 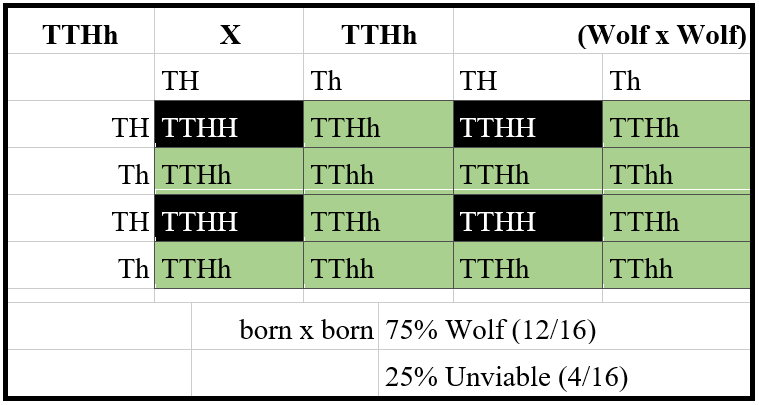 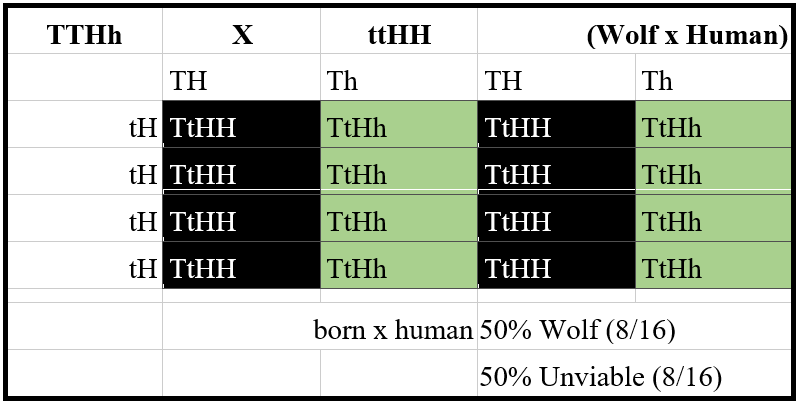 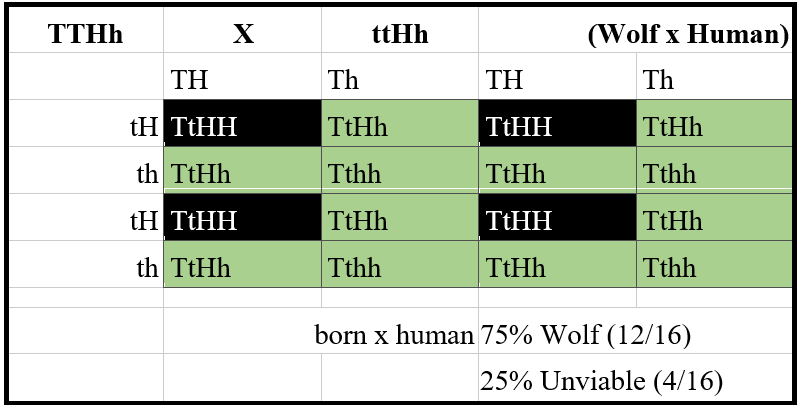 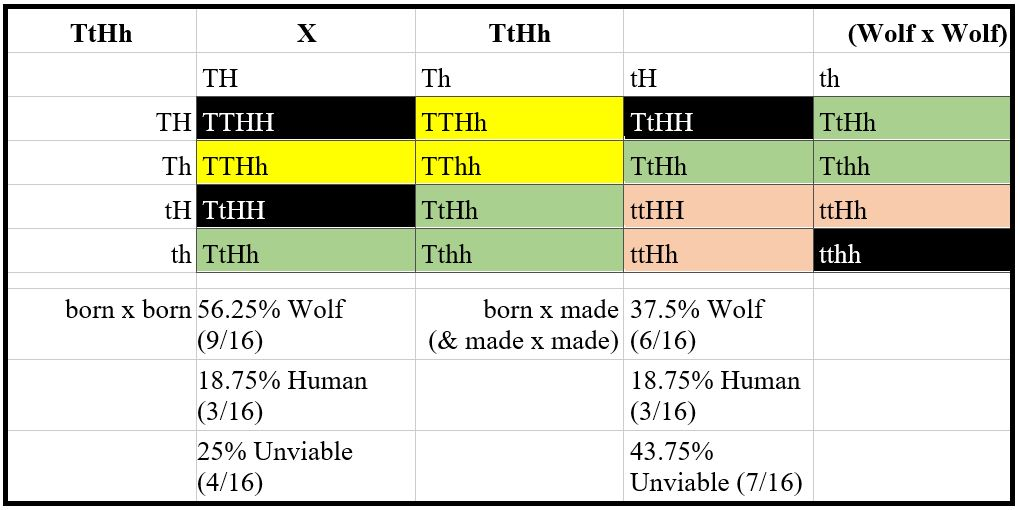 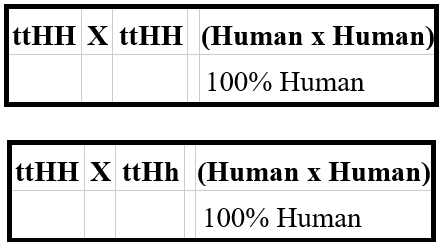 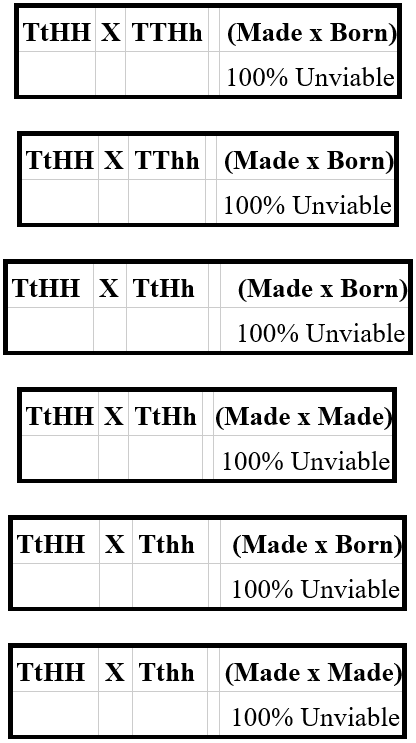 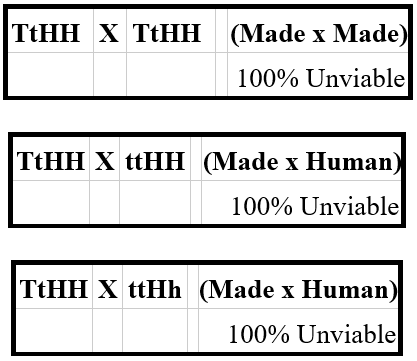 OKAY THEN! ARE YOU STILL HERE?!?

I’m so proud of you for sticking with me for so long!

I know a lot of this reads like a textbook, but it’s because SCIENCE*!

This was a SUPER geeky way to explain the full heritability of my werewolves, but I really enjoyed doing all of these Punnett Squares and figuring out the nitpicky bits here. Special thanks to my bestie Trishinator (Twitter @finns_keeper) for getting me started on this path, and a second special thanks to my CP Ace (Twitter @TheACEofHUNTLEY) for taking a look at my work and for providing an additional perspective.

If you have a background in genetics and are looking at all of this with disgust because NONE of it makes any actual sense and it’s all so frustrating, drop me a line from my contact page (or find me on Twitter (@DR34MR) and send me a direct message)! I am open to hearing new perspectives on this!

A PLACE TO RUN is available now at all major retailers!